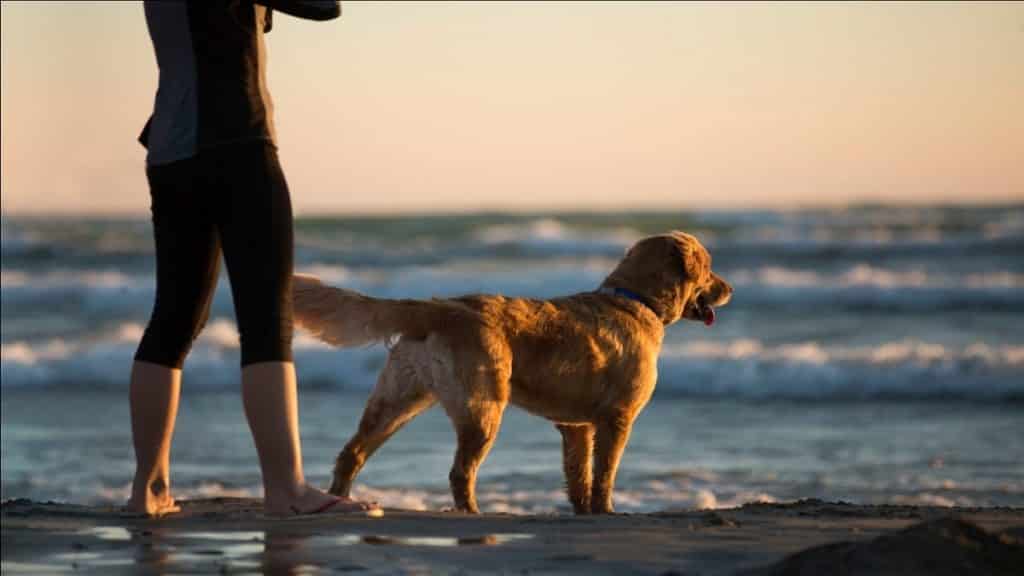 It’s hard not to love a sweet and affectionate golden retriever. Not only do they come running up to greet you, but they are friendly even towards a complete stranger. They are undoubtedly the most-beloved dog breed. They’re the third most popular breed of dogs, according to the American Kennel Club. Known for their loyalty and friendly nature, they’re quick to befriend anyone.

They’re one of the most famous breeds of dogs to serve as guide dogs for the blind. They are capable of accompanying people who need physical assistance. They can also train as alarms for those prone to seizures. All because they possess similar traits as the dogs bred for home defense, such as loyalty, intelligence, and obedience.

Now, are you thinking if it would be possible for you to train your golden retriever to be a guard dog? Wouldn’t it be great if your pet can protect your family and your possessions? It’ll also help to channel all that extra energy into something productive.

As they’re naturally friendly, training them could be a bit of a challenge. But it only requires you to spend some time and energy with your pal. This could also turn out to be a good bonding experience for the two of you.

Before you decide if you want to train your golden retriever for defense, get to know the breed better. We’ve listed down all the pros and cons of teaching a retriever to defend your home.

Pros of a Protective Dog

Golden Retrievers tend to have a heart overflowing with love. They enjoy receiving everyone’s affection, so like to be friends with anyone. Hence their loving nature leads them to fall hard and fast in love with their owners.

Goldens are faithful companions and highly devoted to their masters. You’d find plenty of tales about them being reunited with their family after they’re separated by going against all odds.

You won’t find many dog breeds that are as loyal as the golden retriever. This quality makes them instinctual protectors.  You must have heard them contradicting their nature to safeguard an owner in times of danger.

In case you’re unaware of how these dogs earned their name of ‘retriever’, let us tell you. In the 19th century Scotland, they use to breed them for obedience. When the masters when out for hunting, the retrievers provided support.  These dogs were known to retrieve the birds that had fallen after getting shot down.

Retrievers are keen to please their owners and tend to follow directions happily. Famous for their calm nature and obedience, they’re quick to learn new commands compared to other breeds. Although they aren’t aggressive in nature, they can be taught to follow orders, including defending the home.

Have you noticed that retrievers can easily win obedience training competitions? You’d also commonly find a retriever to be a top pick as a service dog. Well, that’s because they’re more than just a pretty face.

Quick to sense trouble, golden retrievers are also popular as service dogs for people with epilepsy who suffer from seizures. Their instinct helps them know when a seizure is going to occur. They can get help for them in such situations.

Their intelligence in not limited to just knowing when danger is present. In fact, they’re smart enough to undertake measures. They try protecting their owner from getting harmed by lessening the danger.

Though dealing with risk generally involves an artificial source. You can train them to detect intruders too. Their high intelligence can help them take action and protect their owner from humans that pose a threat.

Cons of a Protective Dog

You can train golden retrievers easily. They’re extremely loyal, super protective and are eager to obey commands. Sure they seem like a good fit for guard dogs on paper. But before you make up your mind, let’s have a look into the intricacies involved.

‘First, do no harm’, the Hippocratic Oath is subconsciously followed by the retrievers. So much so, we can almost imagine golden retrievers as doctors.

Protection of its owner from harm is the utmost priority as if it runs in the blood. But there’s a huge difference between leading a human away who’s about to get hit by a speeding truck and assaulting another human attacking you with a weapon.

Your golden doodle wouldn’t wish to put any human to harm, in spite of them posing a threat to you. You can definitely teach them to attack. But that’ll require them to go against their natural instinct.

Surprisingly, retrievers are quiet dogs compared to other breeds of their size. They are family dogs, especially for the ones that have little toddlers. Your children can enjoy their sleep without getting disturbed, as they are less likely to bark.

But this also means that they don’t act as natural alarms. A retriever won’t make a single noise even if a robber breaks into the house. So, you’d probably sleep through the night undisturbed.

The playful retrievers are gentle and lovable with just about anyone. They are the prime example of the saying that a dog is a man’s best friend. They’re bred to love and receive love in return.

The main thing that would fail them as a good guard dog is their affectionate nature. They don’t have a suspicious bone in their body. Hence, they won’t be able to figure out a human that has bad intent.

How to train golden retriever to guard?

Well, if you’re still adamant to train your dog, we’ll guide you through. Begin with encouraging the sort of behavior he will need to be a guard dog. Make boundary training a part of his routine. Finding the right incentive is the key for training to be successful. Food can get these dogs to do almost anything.

It’ll be more convenient for you to start training them young. Puppies are easier to mold and you can witness results within a month. However, it can take around six months to train an older retriever.

Before You Proceed Training

Get hold of a few things prior to starting their training. You’ll need a long training leash and plenty of your pet retriever’s favorite treats. Take out 15 minutes daily from your schedule, where you both can spend time training. Make sure to get access to the place or the object you’re training your dog to guard. With an active approach and perseverance, you’re ready to go.

We’ve listed down a few methods of how you can train your Golden Retriever.

Put a belt round the neck of your retriever and head out in the morning. Walk him around the area you want to protect. He should be able to concentrate, so stay silent. Carry out this practice daily, and in the evenings as well. Soon your dog will naturally want to protect anything that falls within his territory.

You can fasten him to a long leash in daylight. This will let your retriever move around freely near the object or space you want him to defend.

You don’t want him to turn aggressive to just about anyone. Ensure he can socialize with other humans and animals. Taking him to group obedience classes will help.

Soon he’ll display interest towards a stranger or bark. Be sure to reward him with tasty treats and verbal praises.

Shift this practice to a place or object you want him to guard. For instance, use people he doesn’t recognize and have them approach slowly. Point and draw his attention to them and command him to bark. Once he does, instruct the human to move away. It’s important that he knows he needs to bark until the person has left.

Carry out the practice a few times each week and reward him every time. Soon he’ll develop a habit of barking at strangers approaching.

You can start training your puppies when they’re young as they’re quick learners. Call out to him when someone’s at the door. Whisper, point or do anything that’ll bring him on edge. Instill the ability of him being aware when a new person approaches.

They learn by mirroring, so if you wave and call them when someone is at the door, they’ll learn. When you notice them learning the behavior you expect, do reward them. Be sure you can control and channel out his aggression in the right way.

Having said that, we will not advise you to train your Golden for this task. You can have a golden retriever as a guard dog for yourself, but remember that you’re basically training it to go against its nature, which can be very confusing for the dog.  If you do insist on going through with the training, then try to get through it without them getting aggressive.